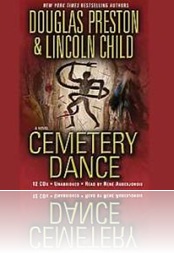 Douglas Preston and Lincoln Child have long been known for their ability to stand out amid a very crowded genre – and they certainly carved a niche’ with Cemetery Dance. Agent Pendergast has worked his share of interesting cases and had more than his fair share of close calls, but this time he has to risk much more than his physical safety…in Cemetery Dance, Pendergast dances with the devil, stepping in between the shadows on a journey that will take him places even he never imagined.

The narrative opens on the remnants of a wedding anniversary celebration interrupted by a knife wielding assailant, that leaves New York Times reporter William Smithback Jr dead and his wife, Nora Kelly (Museum of Natural History anthropologist) clinging to life. There seems to be no question as to the identity of the assailant – several neighbors within the Upper West side apartment complex readily identified the attacker as one of their own, a neighbor, Collin Fearing. But that is impossible…Collin Fearing had been dead and buried for nearly two weeks.  Thus setting the stage for an intriguing tale that will take our team of detectives into the lair of a modern day cult in the heart of Manhattan.

Vodou rituals, mysticism, sorcery, within this realm the Obeah is the most dreaded and the most feared of all practitioners. The Obeah or Obeahman is believed to have virtually limitless powers, including the ability to resurrect the dead, which seems to be what someone wants the residents of New York to believe. Digging into this case, Pendergast will find some unusual characters hiding sinister motivations beneath the cloaks of the cult.

With several well known and beloved characters reprising their roles in Cemetery Dance fans are in for a real treat – however, as with their other novels, this one stands alone. So, there’s no reason to hold back – if you have never read a Preston/Child novel before, you can pick this one up and dive right in. Their writing is so spot on, detailed and character driven there’s nothing missing accept you! And with Rene Auberjonois’ providing the narration even those who have read the print version will be intrigued by his incredible presentation. His portrayal of Agent Pendergast breathes life into the fictional character, pulling him off the pages of the book and presenting him in living color. I was amazed by the depth and range Auberjonois employed throughout, going so far as to incorporate gutteral, zombie noises into the narrative. Which I must admit gave me a shudder and added a bit of “oh my” to the vibe. The audio version of Cemetery Dance (from Hachette Book Group) is exceptional and I highly recommend it to anyone who enjoys an exciting novel that doesn’t fit into any of the pre-determined, cookie-cutter classifications. Preston and Child do an extraordinary job delivering highly unusual material in an intelligent manner that enlightens the reader and engages your senses on a variety of levels. The information revealed in the novel was so provocative, it peeked my curiosity, prompting me to dig deeper into the topics. This is entertainment at its finest, from two of today’s most popular authors. Knowing this and accepting the story for what it was intended allows you to sit back, relax and thoroughly enjoy this unique work.

CLICK HERE to view a short video at Amazon.com

Pendergast-the world’s most enigmatic FBI Special Agent-returns to New York City to investigate a murderous cult. William Smithback, a New York Times reporter, and his wife Nora Kelly, a Museum of Natural History archaeologist, are brutally attacked in their apartment on Manhattan’s Upper West Side. Eyewitnesses claim, and the security camera confirms, that the assailant was their strange, sinister neighbor-a man who, by all reports, was already dead and buried weeks earlier. While Captain Laura Hayward leads the official investigation, Pendergast and Lieutenant Vincent D’Agosta undertake their own private-and decidedly unorthodox-quest for the truth.